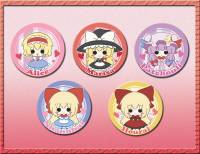 A Gensokyian bar. A typical Gensokyian day. Alice Margatroid, her dolls Shanghai and Hourai, Marisa Kirisame, and Patchouli Knowledge are all sitting together at a table. Konngara, the bartender, passes out the drinks they ordered. Alice takes the first drink, and Marisa and Patchouli drink after. When the drinks are done, Marisa passes out mushrooms. "Magic mushrooms! From the Forest of Magic," Marisa exclaims. She eats her serving of mushrooms. Patchouli digs right in, and Alice devours them with Shanghai and Hourai.

After the mushrooms are eaten, Marisa, Patchouli, and Alice feel a bit dizzy. Then, they see the floor collapsing behind them! "Aaaah!" they all scream! They fall through the floor.

Marisa, Patchouli, Alice, Shanghai, and Hourai soon find themselves flying through space. They drop down in a mushroom forest. "We should explore this forest," Patchouli says. "But where should we start?" Alice asks.

Where should they go?
[x] Left
[x] Right

What should they do?
[X] Attack
[X] Hide

Where do you think they should go now?

Giant mushrooms blocked their path! "oh, no," Patchouli moped. But then Marisa climbed on the mushroom and bounced up! She got out her broom and rode on it. Patchouli, Alice, Shanghai, and Hourai did the same, and got on Marisa's broom.

Where are they going?

RULE OF COOL YO
HELL TO THE FUCK YEAH! IT'S EXPONENTIAL!(tm)

Surely this is Kanako's gift to grinds, right? It's just like surfing!

Truly one for the ages. What a time to be alive my friend.

Instead of letting a story sit, unresolved, you at least gave closure. You closed a book, as it were. Yes, it was comically short, but you still didn't let it sit here unresolved.

For that, you get a gold star few receive. It's weird saying it, but there should be more writers willing to close a book that will never get finished. People should look to you as an example of writing.