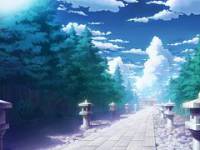 The decision to help all beings achieve enlightenment and happiness is the meaning of being a Bodhisattva. This can take many forms, and may happen in life, or happen after choosing to descend from heaven to help others.

Senses, something alien after a thousand years, scents of a forest, the feeling of the hard ground around you, it’s overwhelming.
The sun is bright, even behind closed eyes. You pull on the ground and hoist yourself to a sitting position finally opening your eyes.
…
White… a white path seemingly going on for miles, with the faint outline of a building in the distance shadowed by the morning sun. It seems familiar, where are you?
A snap, you clutch your head in pain, memories coming to bear all at once in your brain, you see them, fighting for your attention, a war, a journey, a decision, too vague to make out amidst the pain, but one thing stands out as the memories fade, the reason you descended.

You remember now, your sister, Byakuren. So distraught by death she sought immortality. The very antithesis of your teachings, even worse, she has resorted to working with Youkai. Because of this, you have received a mandate, either move her from this path, or kill her.

But first you must find her, a quick glance shows the path is made out of ornate stone, marked by lanterns of the same material, it’s well worn and appears to be traveled frequently, behind the path goes on around a corner, but you can see smoke in the distance, a village perhaps?

Around you sits a forest, thick, and undisturbed.

Where are you going?

[] Make your way towards the building.
[] Head towards the smoke.
[] Veer off into the forest.

First time posting on THP, not a new writer but I have never written a story publicly before, majority of what I have written are role-playing campaigns and settings, so criticism is nessecary at this point, thank you.

So Myouren is the character for this one. Cool don't see him used a whole lot.

Oh boy, wait till he hears about the sailors.

I'd like to chat with some of the other Gensokyo residents before we go for the obvious route and find Byakuren.

The most realistic choice here.

Hopefully he sees how different the Youkai here are, or he's gonna have some major cognitive dissonance goin on.

Really the closest and most obvious choice here.

No need to make our way to Byakuren off the bat, we'll find her one way or another.

-Make your way towards the building-

With a heavy sigh you start the slow walk towards the building in the distance, gazing at the landscape as you do so, the forest is untouched, very few signs of human interference, besides the path of course.
The path itself is carved white stone of high quality, dirtied only slightly by travelers and animals.

At least an hour has passed since you have started walking, as the sun has moved from its midday position, but the building comes no closer, nor does the smoke grow farther away, it’s impossible to tell if you’ve made any progress, besides the lanterns there are no landmarks.

A few hours pass with little progress. Though you have realized the sounds of the forest have tapered off to nonexistent, yet the building is ever far away.

As you turn to check behind, the path is gone, no more than ten feet behind you it ends abruptly in a closed circle, marking the end of the path, what used to be the road is now a clearing surrounded by a bamboo thicket.

In this clearing lies a manor, old and in disrepair, with no ready signs of life.

The sun is setting, casting an orange glow over the environment.

What do you do?
[] Continue on the path as before.
[] Investigate the structure.
[] Make camp at the tree line.
[] Veer off into the Forest.

I'm sorry if this comes off as antagonistic, but you might want to brush up on your Buddhism more. Familicide isn't... isn't usually on the table as an option. I mean, even the BUddha rehabilitated Parvati's cannibalism instead of sealing her away, while Sun Wukong basically got parole and eventually became a Bodhisattva himself.

Either Myouren's been possessed by something, this isn't really Myouren, or Myouren's a terrible BUddhist like his sister.

My Buddhism isn't the best, either what I picked up in my religious courses or just read about, but seeing as he's the one who taught her magic, they are both rather horrible at being Buddhist.

Buddhism isn't actually magic-intolerant. See Sun Wukong again, who used and abused Taoist spells for giggles and profit. Byakuren's magic is specifically mentioned as evil, but she only learned that specific brand after Myouren kicked the bucket.

Fair point, but then again, Sun Wukong was a jackass.

But still, will downgrade "kill" to "subdue".

Being a terrible Buddhist doesn't mean you're a terrible person. It just means you don't follow the tenets of Buddhism very well.

Lastly, if the implication that Myouren is a Bodhisattva is true, then there shouldn't really be any 'mandates' involved. The First Buddha doesn't really get head hancho ordering abilites over Bodhisattva, each one just does its own thing. Going back to Sun Wukong, the Emperor of Heaven didn't mandate Sun Wukong to be sealed, he just asked if the Buddha could do anything about it.

For a story that might be based entirely around Buddhism, it just feels... incredibly 'off'.

It appears my first story idea fell rather flat on its face then.

My own suggestion is to do some more research on Buddhism and then try again. Like any religion/philosophy, Buddhism has offshoots and disagreements, and you might be able to find something to play off of between Myouren and Byakuren. Seeing how the elder Hijiri deals with Gensokyo would be interestng, as well.

I'm enjoying writing, so I see no problem, Myouren is an interesting character to work with, I think if I research and get a layout this could work rather well, thanks.


somewhat late to the party, but i heavily endorse pic related.