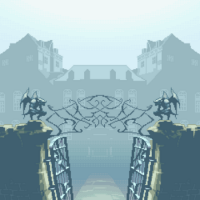 FFFWWWOOOOOOOOOOSSSSHHH!
Stupid forest… It always does that in front of everyone. Does it think this is making itself look good? Look attractive? No. It looks repulsive! If I could get to it, I would defiantly tell that bastard that what it is doing is wrong. And that it should be ashamed.

This is what Bloodrust Mansion thought as it watched Magic Forest in its brief moment of ecstasy. The forest seemed happy as it let out a load of golden red and wet leaves into the sky, the excess of it slowly dripping down the sides of the rivers nearby.

Really? Again?
Bloodrust Mansion wished it could turn away, but its fixed position made that idea impossible. It just had to bare the horrible eyesore that was Magic Forest. Not that it was unusual. Bloodrust Mansion had been watching Magic Forest for hundreds of years, and it's favorite thing to do was disrobe itself in front of everyone like the exhibitionist it was.


Of course, Bloodrust Mansion hated this. Magic Forest made Mansion feel dirty by forcing it to watch it's strip show. It made Mansion feel like some sort of freak and pervert. What it would rather view was this rumored landmark that was said to be one of the greatest things in the world. A place so pleasant that the landmark's smell alone could send a person into a trance. Something that everyone is told that they should see, but many never have the privilege to do so. That thing was named Ocean.

But alas, Bloodrust Mansion itself was one of those that would never see Ocean. Youkai Mountain was nice but it was way too snooty, and Nameless Hill scared it, Wind was universally disliked since it enabled all of this but worst of all was this stupid pervert Magic Forest!

Sigh… somebody break me down now.

One day, a group of youkai walked by Bloodrust Mansion, seemingly on an assignment. Mansion normally wouldn't care, but this time it was horrified by what it heard.

"We're going to cut that large dead tree right there," briefed one of the loggers as it pointed to a large rotten tree which gave one of the few blindspots Mansion had from Forest .

"Not only will the ugly thing be gone, it will give us Forest dwellers a better view of Bloodrust Mansion." ....and vice versa “And later we can make an actual path to it” …please no

A better view of Magic Forest? Are they crazy? Who would want to look at that horrible thing?

Smoke was then seen rising from Magic Forest. You and me linked together baby? Oolalalala was what Mansion translated from it, Mansion could read Forest in and out after all.

But Mansion had to deal with it, it had no power over things outside it’s domain. The youkai’s did as promised and removed the tree that obstructed much of Mansion's view. It hated this: Mansion just knew that Forest was going to expose itself more than ever next time it got a chance.

Little did Mansion know that this was but the start of a very BAD day.

[x] Some time later, a bunch of oddly dressed humans came at the gates.

[x] Some time later, some mouse youkai tried to dig in the gardens

[x] Some time later, something from the sky crashed into the roof.

Author's note: This is an short story which I will update every day and it won't be too long. Ever seen an haunted house or mansion? well that's the protagonist of this little story. (Though if I fail to update once, then I'll update twice the next day)

It's also a neat way to prepare myself for Spooktember.

IMMEDIATE STORY CROSS-OVER, NO RAGRETS, FULL STEAM AHEAD, [other exclamation of enthusiasm], HAHAHA!

[x] Some time later, the mansion exploded in unbridled rage.

I wonder what a tsukumogami of a whole building would be like? Would it just sprout legs and walk away?

Expect in an hour or half.

[x] Some time later, the mansion exploded in unbridled rage.

…To think I’d hear an sound so similar to the real deal after so long. How long has it been?

Bloodrust Mansion was being nostalgic again, it never knew it could feel this way but live another hundred years and weird things to happen. There was nothing to be annoyed about now at least.

To clarify there was nothing if anything around Mansion’s territory now, no more green grass for bugs to use as an hiding spot in order to enter Mansion’s garden and pilfer it’s succulent cherry juice nor was there a blue sky filled with birds that would usually defecate on and breed on Mansion’s red tiled roofs without a single concern for the defiling and disgusting acts they were committing on a Mansion’s honor. No! Nothing was ever going to disrespect Mansion again…That was made sure off.

You did great, I always knew that deep inside you were just like me
Petals of a iconic flower dropped into one of it's chambers via the window, such a vulgar way to give someone a greeting could have been only be one person: the Rubenesque (think that’s an shade of purple) color of the flower in moonlight was unforgettable and the hypnotic pattern of it falling from the sky even less. Mansion only knew one person with this kind of deadly allure.

Sigh, it’s Nameless Hill again, can’t even watch an abandoned wasteland without it occasionally interrupting. Sure the fact it covered the black spots of ashes that used to be Magic Forest was a factor to that but even if it helped me unleash that that still doesn’t give it the right to act so frisky.

Bloodrust Mansion huffed, if it had an nose it would have been able to smell the sweet poison emanating from the red lilies but it didn’t, it had to remind itself it owed an debt to Nameless Hill before any violent words could leave its mouth: If anything should it not be grateful?

Mansion couldn’t understand Nameless Hill’s sudden activity if it was being honest. Nameless was always so passive, so quiet and morose. So why did it talk more and spread around it’s petals this much?
Maybe…just maybe… Nameless Hill matured.

No way, Mansion thought, there’s no way that could be true.

Nameless Hill was always a self-isolator, just like a kid who hated the real world and dwelled in the woods to “Live in an area as black as the dark recesses of my soul” so was Nameless the type to hate any living creatures that tried to enter it, hence it used to live in only place. While Mansion found it weird, it also found the change…attractive. Without the constant edgy lines unnerving Mansion, it could stand view Nameless Hill more closely. Bloodrust Mansion could now focus on Nameless’s smooth chest, it’s well trimmed bushes, and large… large… hill…

NO! What am I thinking about!

Bloodrust Mansion turned as red as the sun inched down closer to the hour of twilight. Mansion couldn’t believe it was thinking dirty thoughts about Nameless Hill, even though to be fair, Nameless Hill grown up face was quite smooth and good looking. And the little petals in the air? It reminded Mansion of falling stars.

It didn’t take much to convince Mansion, because it already figured it out. Nameless Hill was in love with me! But it was an love that was forever to be left unrequited. Bloodrust Mansion was simply too small and far away. The two would never feel each other’s touch. Who is Nameless kidding anyway, it probably can’t even explore all of Mansion in the first place. Not that Mansion would allow it! It was an proper and well-built building after all. It’s not like anyone can just come in and take her-it.

…But Nameless Hill can dream, if it wasn’t for them Mansion would still be exposed to Magic Forest, One-sidedly Mentored by Youkai Mountain and taunted by Wind. Good riddance to all of em!

All these white and purple flowers were starting to block my windows! What do you want you wannabe bad boy? I don’t have all day you know.

Nameless Hill simply continued, as if to aloofly ask : So how does it feel? To see all that’s been created besides you destroyed by your hand and now to be left with nothing?

It was a dumb question, but Mansion took the closest thing to an deep breath, their gaze went over the ruins of what were once acquaintances of an daily life, their destruction seared deep into Mansion’s mind. The sheer power of that rage-plosion was carved deep into it’s heart.

It was absolutely euphoric