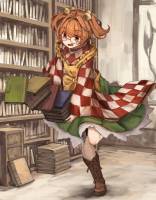 A thread to trip, scatter, and fumble all over Touhou-related source myths and scholarly materials. Feel free to contribute anything of interest, even if the connection might not be obvious at first!

First up, we have a paper on those mysterious mountain-dwelling folk, "The Tengu". It's got more than you ever wanted to know about our nosey pom-pom-wearing neighbours—what kinds of tengu there are, their origins, their eating and possibly even mating habits, and selected myths from every era—courtesy of one Dr. M. W. de Visser from the Asiatic Society of Japan.

Anonymous 2021/10/14 (Thu) 10:35 No. 16404 ▼
Delete Post
Report Post
>>16403
A quick look at that tells me that the tengu are very much a catch-all sort of supernatural creature in Japanese tradition. There's barbarity and oni-like behavior, possessions (and trying to seduce priests while in the bodies of women), transformations, behavior like angry spirits/are ghosts of the dead, tree demons, and a lot of links to Buddhism. They could just as soon be bros and teach humans swordmanship or something else or try to destroy them. There seem to be several mentions of pearls/stones in relation to (greater) tengu. All in all interesting stuff. Even if the source takes that sometime patronizing tone common in Victorian/Edwardian analysis of other cultures.

Of course no such thread could be complete without the oldest record of Japan's myths and legends and indeed the oldest extant written work from Japan, the Kojiki or "Records of Ancient Matters". Being written as they have been in a combination of Old Japanese and contemporaneous Classical Chinese, it is rather awkward in translation—B. H. Chamberlain our English translator going as far as to call them "queer and bald in Japanese ... and it is therefore right, even from a stylistic point of view, that they should sound bald and queer in English"—but still the stories contained within are quite vivid and a careful reader will encounter many familiar names and figures, not least of which include Hieda no Are its original composer and Motoori Norinaga its most prominent latter-day decipherer. One will learn of the cleverer and not-so-clever machinations of Yagokoro Omoikane and Ame no Sagume, the true species of the sisters Toyotamahime and Tamayorihime, and even the rather inauspicious birth of Haniyasubime. Most of all will one learn of the life and times of Ōkuninushi, youngest among eighty brothers and good friend of the White Hare of Inaba, whose story is so often forgotten in popular dissemination in favour of those of Izanagi and Izanami and of Amaterasu and Susanoo—and whose dealings with the heavenly gods of Takamagahara still cast a Moon-shaped shadow over certain parts of Gensokyo to this day.

Only, it is advised that one do indeed consult the footnotes (of which there are regrettably many, coming out to probably thicker than the text itself), and note down what Japanese name corresponds with what English rendering, unless one enjoy reading about the exploits of His-Swift-Impetuous-Male-Augustness in the palace of the Heaven-Shining-Great-August-Deity.

Also, all of the naughty bits are rendered in Latin, because this translation was done nearly a century and a half ago. But, trust me, you're really not missing out on much.

(Alternative source, in the interest of maximal longevity: https://archive.org/details/transactionsasi27japagoog )