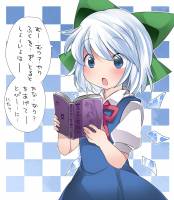 Whoops! Looks like the previous one is finally on autosage. Here's to another five years, I guess.

Let's not actually take five years, though it's most probable at this point.

Might as well take this opportunity to repeat my recommendation for From the Scarlet Moon Flows the Spring and add that Clever, Audacious, and Wise -- and most of Teruyo's stuff from the past couple of years, really -- is worth a read.

Teruyo!Wo5j3FYZRg 2020/05/09 (Sat) 01:52 No. 16112 ▼
Delete Post
Report Post
>>16108
I think a lot of that comes down to how people voted. Readers seem more interested in dealing with the mystery of being a stone than the actual work at the SDM and possible reasons why a werewolf would bother. There's still a fair amount of story ahead, however. So who knows what may yet happen. While I don't agree with some of your conclusions, I think there's still room to explore.

The acronyms are for the English parts of the titles. PCB is a very standard game, LoLK is difficult but has a default crutch mode, and WBaWC is the current latest and quite fun. Once you have your sea legs, I'd recommend playing in order, including the side games, starting from EoSD. Don't worry about beating any of them, if you get frustrated moving on is fine. Recommendation: use your bombs.

Anonymous 2020/07/23 (Thu) 16:58 No. 16155 ▼
Delete Post
Report Post
>>16152
Not really the thread for this, but since we're here I'd recommend DDC for its straightforward arcade-iness. It's all relatively easy -- save the stage five gimmicks. I'd also put forward HSiFS in a similar light, but with the caveat that it's a bit mean in terms of having bullets that can be hard to see at times. Same deal with WBaWC.

If you need more info on the games or, well, most other things, I'd recommend consulting Touhouwiki: https://en.touhouwiki.net

Play on lunatic for about an hour or so to get a feel for the deathbomb timing, then switch to normal.

Normal takes about 3 months to 1cc

After that, hard will be about 2 weeks

Then finally lunatic after about 3 weeks after that.

sage 2021/06/02 (Wed) 22:37 No. 16257 ▼
Delete Post
Report Post
I only learned of this site a couple weeks back (first time posting too), but I've already barrelled through the works from Keymaster. Being Meiling alone is a very fun read all around, can recommend.

More on-topic: I liked The Beast and the Crime and wish it had an ending.

By that I mean detective work or film noir stuff.

Forgot the names but saw 2 of those a week ago and would like to refind them so I can use them for inspiration and maybe even make a story too!

If anything I just said makes sense then I'd love your help finding them again.

>sage
Definitely don't do this if you want a response because I doubt many have this thread watched, and that's all who'll see it if you don't bump.

So to specify I meant stories like Compensation: Adequate ( https://www.touhou-project.com/th/res/124133.html ) ; Those Cirnoir moments in MIG and uuh kind of on a blank here

As long as the story has some unknown culprit that needs to be found out it's fine by me.

Those pi self monologues are optional ( "Bradbury was right... there's bad and there's bad. But what I walked into when I left that night made all the magic and witchcraft I'd seen up 'til then look like a sideshow. My name's Lovecraft... and I'm the guy who knows. Just about the only guy who knows it all... who's still breathing. It started that night and it started with a woman. It always starts with a woman." for example).

Also sorry I didn't know what sage does and won't make that mistake again.

I don't know if its noir, but City of Harsh Fantasies over in /others/ has a detective as the main character. I think the story is dead though.

I was looking for a story just yesterday but forgot the name of it! please help.

The premise was as follows irc: Some mad conspiracy theorist ends up in Gensokyo and somehow spreads his bs logic to our fellow 2hus while almost definitly leaving destruction behind every location he goes to. it was the weirdest thing I've ever read.

The theory was something there are actually 4 Hours going on at once instead of 1. Educator Stupid!

Think it was on the forest or underground board.

If it rings a bell to anyone, I'll gladly hear it.

Forgot to add that.

For some reason, cross-board linking isn't working with that particular thread, so just search the story list.

Incidentally, I think you mean IIRC for "If I Remember Correctly"; IRC is "Internet Relay Chat".

Are there any touhou with mechs stories in here?

My mech cravings are satisfied

Anonymous 2022/03/16 (Wed) 17:01 No. 16479 ▼
Delete Post
Report Post
there's this story i remember about a mage or something being told to go to gensokyo and steal Ran's hair to pay his debt (?), i remember the thing about the mc is that he has shit magic power but is really good at magic control so he thief stuff with his magic. anyone knows which story i am talking about?

Anonymous 2022/05/28 (Sat) 01:50 No. 16494 ▼
Delete Post
Report Post
Hey, i'm fairly new to touhou (and so, the board) and i just wanted to drop in a rec for the story that got me interested: [i]Scarlet Devil Project: Antinomy of a Devilish Vampire[/]
https://forums.sufficientvelocity.com/threads/scarlet-devil-project-antinomy-of-a-devilish-vampire-touhou-whf.92110/