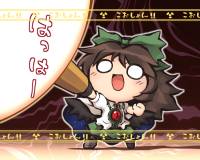 This is a travesty. The Cabal has been talking away here, and it’s become obvious that we will decidedly not be having a NaNoWriMo this year. Why? Because reasons.

Is this really how we want things to end up? I, for one, do not relish the idea of inertia killing off contests, one of my favourite THP institutions.

However, before I descend into ranting and get a couple of particular individuals on my case, I will admit that “timing” and “circumstances” can and do make things hard on people. Asking you guys to jump onto a full-fledged contest when things are in this state is only asking for disappointment, too. So, what do we do? Well, that’s why I’m dropping this notice a half-month in advance.

What are you on about?

Look, we haven’t had any contests this year, and it looks likely at this rate that we won’t if nobody steps up and organises one. Since it doesn’t look like anyone’s going to do that, I’ve had to jump off of my lazy ass to make it happen.

That’s why I, a shitass anon and failed writer, am bringing you…

You come up with something better next time, then.

Okay, so is this just another annual contest, or…

Not quite. See, like I said, I’m fairly certain opening a regular contest would just be disappointing. We might end up with a couple of entries at best, based on the sentiments I’ve heard.

Instead, we’re going to be going with a much simpler premise:

If you’re a writer, UPDATE YOUR GODDAMN STORIES.

If you’re a reader, VOTE IN THE GODDAMN STORIES.

Regardless of which you are, DISCUSS GODDAMN STORIES AND 2HUS.

Calling this a “contest” is probably more than a bit disingenuous. It’s really more of a public statement, kind of like Martin Luther nailing up his list of reasons why the church sucks shit or whatever the fuck. If nobody else is going to do anything, then there’s no reason I shouldn’t do a shitty callout post.

And that’s really the whole point here: THP is only as active as you make it.

What do we even get out of this stupid stunt?

Nothing but the pride of knowing that you’ve actually acted like a contributing member of a community for once in your sorry life.

How do we even know who wins?

That’s the thing. If everybody does their part and gets involved, we all win. Even if only half of us get involved, we still win. It’s all about generating activity.

The only way we lose is if absolutely nobody gets involved. If that happens, Okuu will be very sad.

It’s partially up to you! Officially, it starts and ends in the same general range as NaNoWriMo; i.e., from 01 November to 30 November. However, with time zones and all that mess, the exact times and such when you start are all going to be relative. That’s right, we’re not going by site time. Just start and end on those dates in your local time.

Anything else we need to know before it starts?

There is a bonus objective for those of you who are willing to do things off-site.

Join the THP Discord (https://discord.gg/UPHZMWy) and come in at least once a day to discuss 2hus. You can shitpost if you want — it happens a lot anyway — but it’s really more helpful to talk about things pertinent to THP.

Anonymous 2019/10/17 (Thu) 01:15 No. 15831 ▼
Delete Post
Report Post
So you're telling me there are still stories that update here? And I shouldn't just check back here every couple years just in case A Wizard if YOU updates?

Sheeeeeeeet nigga that's all you had to say!

Activating THP? You know how crazy that sounds?

Hell yeah, this is GOOD STUFF!

I'll do it myself if I have to, but I'd prefer for someone else take the initiative.

Anonymous 2019/10/31 (Thu) 16:49 No. 15861 ▼
Delete Post
Report Post
Because Moral felt the need to bump his dumb thread, I'm gonna bump mine to remind those of you with a gnat's attention span that this is a thing. Get ready to do the absolute bare minimum to make a functioning community starting tomorrow.

And to try to follow and vote in a few new stories.

Anonymous 2019/11/03 (Sun) 02:10 No. 15877 ▼
Delete Post
Report Post
Day two. Reminder to all the mute-ass anons: Stop being cowards and come down to the Discord for a chat. Despite the shitposting, we do actually talk about 2hus quite a bit. I assure you we won't meme on you too hard. Well, maybe. Anyway, stay true atomics.

I dunno how many of you are just crawling out of the woodwork for Nano-Reimu, but good on you if you're doing anything that looks like activity. Keep it up, fellow atomics!

I fell asleep and forgot.

I needed to get back in sync.

Do you think sweet potatoes can be found in butts?

And now this is a third just because.

Now, what was that I heard about a whale?

When I posted the OP, I was pretty convinced that there wouldn't be anything happening. I had doubts anyone would even notice this thing for more than a second.

So, did we win? I don't really know. Things were reasonably active, mostly on account of the actual NaNoWriMo happening, but that tells me nothing. Would any of that have happened if NaNoWriMo hadn't gone on as usual? I have some doubts. Still, activity is activity, and activity in and of itself is good. Let's just call it a job well done.

For my part, I'd like to apologise twice: once for constantly forgetting to bump the thread, and once more for getting involved in NaNoWriMo and falling through. I know no one particularly cares, but it's personally disappointing to me. Commitments are seriously hard to live up to.

On another note, I'd like to think that this little stunt has had a hand in bringing folks onto the Discord. Before this started, there were something like sixty or seventy of us total, and now we're over a hundred. Some of you went to lurking immediately, and that's to be expected, I guess. For those of you who continue to be active, pat yourselves on the back. You may not see it this way, but you're doing your part to keep a community as vibrant as possible. It'd still be better if folks wrote, voted, and generally did more on the site, though.

Anyway, thanks for tolerating my cheap little joke. There may be a repeat, or there could just as well not. I'd be glad if someone were to take over for me, but I'm of no illusion of that happening. I guess we'll just have to see next year.

P.P.S. Fortune Teller did nothing wrong.